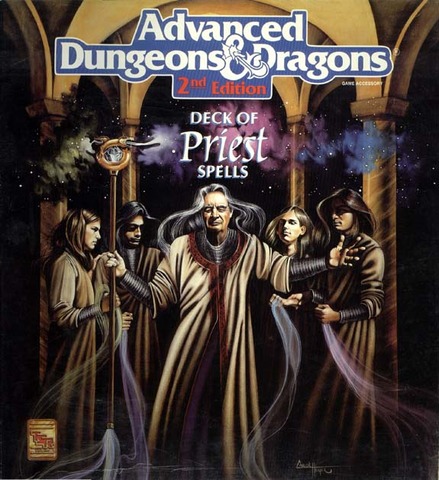 Stack the deck in the Cleric's favor with these spell cards!
Now the powers granted to your priest character can fit in the palm of your hand, using these convenient reference cards.

The front of each cards lists all of a single spell's game statistics, along with icons that instantly identify the spell's level and its sphere. The back of each card describes the spell's effect in detail.

Every priest spell from the Player's Handbook and the Tome of Magic is included - over 400 spells in all. Also included are some handy reference cards with often-used charts and spell lists for making your priest character's life easier.

Stop carrying around reams of scrolls! Organize and speed up your game play with a Deck of Priest Spells.
Also look for Wizard Spell Cards at your favorite game, book, or hobby store.